A little while ago, Borders sent me an e-mail and said I might like to pre-order Strange Fate, the tenth and final (?) book in the Night World series by L.J. Smith. I couldn’t help but laugh as I scrolled through the comments from readers that all generally said the same thing, “I love this series, but I’ve been waiting for it FOREVER.” The comments are generally the same over at B&N and Amazon, where there’s even a forum called “When is this REALLY coming out?”

I’m not laughing to be cruel, it’s just that I’d be willing to bet money I don’t have that most of these readers/commenters, a lot of them anyway, have not been waiting over a decade to read this book, as I have. Most of them don’t even know that Lisa Jane Smith’s books were originally published when I was a teenager, before they were born in some cases. Strange Fate‘s original publication date was shortly before the new millennium and accordingly, the plot of the earlier books reflects that.

When the Night World books were published, 1996-1998, I was 14-16 years old and L.J. Smith was my favorite writer. Her books meant the world to me and I was bewildered by the inscrutable, almost entirely unexplained delay in the publication of the last Night World book. I went to college and still periodically checked in on a giant fan site for updates. L.J. was sick, we heard, but was back to writing and the book would be published soon.

Years passed and I started to believe that the book would never be published. Then, just a few years ago, all of her books were re-issued in new editions that would appeal to rabid fans of Twilight. The Vampire Diaries series was adapted into a t.v. show, which I watched for a while. I had to stop, though, because the t.v. show didn’t reflect either the books or my experience of them as a teenager, or both. But then, I knew they wouldn’t. To be successful in this millennium, they couldn’t. The Secret Circle series is being adapted now and I’ll probably watch a few episodes out of curiosity and because I like Britt Robertson from Life Unexpected. I think she’ll be a great Cassie.

I’m a little annoyed that when (if?) Strange Fate is released, it won’t match my series (though, yes, I have bought all of the reissues). On the left is what MY Strange Fate should have looked like a decade + ago and on the right, what Strange Fate will (maybe) look like when (if?) it’s ever published. And that’s something Lisa Jane’s newest fans may be learning, which her most senior fans have long known – I’m not going to invest my money (and hope) till I hold the book in my hand. 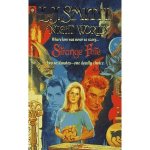 Many of the teenagers reading Lisa Jane Smith (or L.J., as I’ll always think of her) don’t realize these are not new books, as evidenced by one of the comments I read that said Lisa Jane should stop writing multiple series of books at the same time and just finish Strange Fate. 🙂 I feel sad and nostalgic when I think about these books now, especially Strange Fate. Now that I’m almost thirty, I don’t think I’ll ever be able to experience it the way I would have when I was 16 years old, moving to Louisiana and completely adrift.

P.S. While researching online for this blog, I found the following paragraph on the Wikipedia page for The Vampire Series page. This horrifies me as both a fan and a writer:

Unfortunately, Smith stated in her blog on the 9th of February, 2011 that she was fired by Alloy Entertainment and that ‘Midnight’ is her last book. Alloy Entertainment will be hiring a ghostwriter to continue the series. She will still be mentioned as the creator of the series on the covers of the new books but she will have nothing to do with them. Smith has asked her fans not to boycott Harper. L.J Smith has also already given Alloy Entertainment her manuscript for ‘The Hunters: Phantom’, although there are no guarantees that it will be released, let alone with any of her input.

In the Land of What Now Signing

I thought I’d drop in to let everybody know that there will be a signing of the book In the Land of What Now this Saturday at the Metairie Barnes and Noble this Saturday from 2 to 3 p.m. This is the book that served as the blueprint for the movie Flood Streets, which I wrote about here at NOLAFemmes a little while back.

This event is the first Louisiana Cultural Economy Foundation book fair and 20% of the proceeds will go to to LCEF, which awards grant money to local artists like Helen Krieger, the author of In the Land of What Now and producer of Flood Streets.

If you want to check out the stories that started Helen and her husband Joseph’s journey toward making a movie, this is a wonderful opportunity.

Let’s hear it for the readers

This is a different sort of bragging on post. Today, I’m bragging on you, people who I have “met” because of my blog, because of your support and encouragement. Each of you have a wonderful blog of your own, which I not only enjoy, but learn from. It’s Reader Appreciation Day.  With no further ado, let me  introduce you to everybody and everybody to you.

Charlotte of Traveling Mermaid and NOLAFemmes, who is a lovely commenter and who graciously asked me to write for NOLAFemmes. I found myself in good company with Charlotte and the Femmes.

Chellee of Notes from the Intern, who has apparently decided to take a break from blogging for a little while. You should catch up on her blog, which covers the last six dramatic months of her life.

Kate of What I Saw Riding My Bike Around Today, who posts a photo and the story behind it most days. Brilliant idea for a blog and I’m amazed at Kate’s attention to the tiniest details.

Arthur of Calliope Street, with his phenomenal photos and insights about New Orleans and more.

I hope everybody checks these blogs out because they’re really interesting and special. Enjoy!

Tagged as Calliope Street, NOLAFemmes, Notes from the Intern, Reader Appreciation Day, Traveling Mermaid, What I Saw Riding My Bike Around Today

Thoughts on the non-technical side of Argentine Tango, and what it takes to be an effective dancer