Thea whirled to see Selene running through the city gates toward her. The child’s red hair had come loose from her braid and was flowing wildly down her back, and her narrow chest was lifting and falling as she tried to catch her breath. She must have run all the way from the House of Nicholas.

Selene thrust a large straw basket at Thea. “I told you they wouldn’t see me do it.” She glanced at the long line of camels and wagons that had already begun moving down the road. “I couldn’t get away earlier. I think Maya was watching me.”

“You shouldn’t have taken the risk.” Thea set the basket on the ground and knelt to hug Selene. “I would have found a way to do without it.”

“But it will be easier now.” Selene’s thin arms tightened around Thea’s neck. “You’re taking so many risks. I had to do something.”

My last re-reading experience was a romance novel, The Princess, and in my post, I said of author Iris Johansen, “I thought her early thrillers and romance novels were wonderful, but that annoying Eve Duncan character just kept popping up and suddenly all of Johansen’s books seemed like 300-page cookie cutters with the names replaced. I’m afraid to re-read her romance novels, honestly, though I’ve considered trying in light of this project.” Pretty much the second I finished my post, I knew that I had just challenged myself to re-read one of Johansen’s romance novels. And very quickly, I knew I had to re-read the first of her romances I read. I had to go dig it out of storage, but I accepted my challenge and started reading. 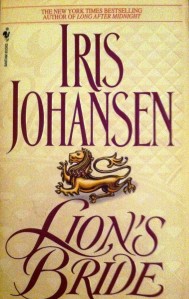 s Bride since 2005 and that was the last one of her romance novels that I read (except for The Treasure in 2011, for the first time). As I admitted in my last post (quoted above), I was afraid to re-read any of the romances, since I’d been increasingly disappointed with Iris Johansen’s thrillers in the past decade and especially in light of the way The Princess felt to me re-reading it now.

But I was pleasantly surprised at how enjoyable and easy it was to read Lion’s Bride after all this time. Yes, at times is was unrealistic and a tiny bit cheesy, and I could see the blueprint of later protagonists in the main character, Thea. So many times, Johansen uses stubbornness as a shortcut for strength in her female characters, male characters, too. There are very distinctive character types in the Johansen arsenal, whether she’s writing thriller or romance, and I feel like most of them exist here. But, in Lion’s Bride, it was easy to remember that these characters once blew my socks off, because before I read versions of them in dozens of later Johansen books, they felt unique and groundbreaking.

The setting, the Middle East during the Crusades with the Knights Templar and the Crusaders as more villains than heroes, was also incredibly unique. I don’t know that I’ve ever read a romance novel set during this time period. Johansen’s protagonist is a Greek woman who was raised as a slave in a silk house in Constantinople and Johansen used a period and culture where women were very restricted and showed how a woman would attempt to make a life for herself and her sister within it. I found that pretty interesting. Also, Thea embroiders a banner in the book that helps to put her in both a powerful and dangerous position and I liked that Thea used “women’s work” in order to protect and provide for herself.

Lion’s Bride came a pivotal juncture for Johansen, after decades of writing romances and right before she made the leap to thrillers. She might’ve already been paving the way for her transition with Thea and this story.

The first book I ever read of Johansen’s was The Ugly Duckling, her first stand alone thriller. I found it at a garage sale and read it in probably one sitting. This was most likely sometime in 1997, when I was fifteen years old. I’d been reading Dean Koontz books for years, had started reading Harlequins and “real” romance novels the year before and around this same time, I would become obsessed with the mystery/thrillers of Jonathan Kellerman. My mom started reading them too and we would swap them back and forth.

The Ugly Duckling was like nothing else I’d ever read and as soon as I finished, I made my mom take me to the bookstore to see if this Iris Johansen lady had any more books. I found her second thriller, Long After Midnight, and — what a coincidence — a romance novel called Lion’s Bride. I tried to act all nonchalant as I used my allowance to buy them both, but I think this was the first hardcore romance novel I bought new at a bookstore, instead of at a secondhand store or taken stealthily off my mom’s shelves as I did with The Princess. I read both of these two books and then when I went to do some research, I discovered that Johansen had started out writing Harlequins in the 80s. Her third thriller And Then You Die… wasn’t out yet, but she’d already published eight historical standalone romance novels and a trilogy which started out as historical and ended as contemporary. So, while I was waiting for that third thriller, I read lots and lots of romance novels by Iris Johansen.

I loved them, pure and simple. I think these were the books that kept me reading romance for a long time and while I’ve dabbled in other authors over the years, Johansen was the pinnacle of romance for me. Until I read Gaelen Foley’s books. She remains the only romance author who I still read each time a new book comes out.

Johansen’s fourth thriller was Face of Deception, her first featuring Eve Duncan and this was the beginning of my disappointment. I didn’t like Eve Duncan and to date, she’s written 18 novels featuring her. There were long stretches were there weren’t any new books that didn’t feature her. And what had felt unique and interesting in her novels before (both thrillers and romance) was starting to feel repetitive by 1999 when The Killing Game, the second Eve Duncan book came out.

Re-reading Lion’s Bride reminded me why my more recent disappointment with Johansen’s books has been so sharp – because I really, really loved her books when I was very young. I already knew I wanted to be a writer and she lived very close to my hometown. In fact, while doing research for this post, I saw something about her house being for sale and there are all these incredible photos of the mansion. It’s an incredible house, but the only room that makes me envious is the library/office space.

In addition to writing the 18 Eve Duncan books, Johansen writes books about other characters with her son Roy, none of which I’ve read yet. I recently made an attempt to catch up with all of Johansen’s recent books, including the Eve Duncan trilogy Eve, Quinn and Bonnie, where Bonnie’s disappearance/death is finally solved. I thought these were the last Eve Duncan books, but since my attempt to catch up a few years ago, Johansen has published another trilogy of Eve Duncan books and her website says that the character will return in 2015. There may be no finale for Eve Duncan, and as annoying as I find the character, as disappointed as I’ve been by the recent books, I’m probably going to read this new trilogy too, because I just have to know what happens. And I’m actually pretty excited to read the new standalone novel coming out in September.

So, even after all of these years, just when I think I’m done with Iris Johansen, she pulls me right back in.

Thoughts on the non-technical side of Argentine Tango, and what it takes to be an effective dancer