For all of my posts about street art and all my photos of graffiti from around New Orleans, I’ve never actually dedicated a post just to New Orleans images. But I always take pictures, compulsively. Most people know by now that if you’re walking with me, I’m likely to stop and start taking pictures. Even Papa Bear knows that after a visit to Elizabeth’s (and the area near Dr. Bob’s) and a walk we took to Juan’s. He was very patient with me while I fell back and snapped pictures of all the amazing street art I saw.

I loved reading about the Swoon exhibit through NOMA over at NOLAFemmes, which is going on through September. Good news for those of us who haven’t caught it yet.

Included in that post (and the galleries of street art images), is one particular image that I kept thinking about.

Just a portion of the work.

Is this street art? Art, yes, available as you walk down the street, yes. But graffiti? It takes up the entire side of a building near my house. Because of the size and the color, I wondered if it might be a mural, perhaps even commissioned by the store housed in the building. This isn’t quite the same thing as street art — which is often spray-painted and involves stencils, for the speed of execution — even if it is beautiful.

So, I decided to ask.

Today, I went into the store Neophobia (which I’ve loved for years) and asked one of the co-owners, Amanda. She said that the artist hadn’t been commissioned by them, but they loved it when they saw it, so they invited the artist back to finish the work. She took my name and number to pass on to the artist, so if I hear from him, I’ll post again.

Meanwhile, this brings to mind another debate. Street art can legally be considered vandalism, though people like me consider it art and photograph it. People like New Orleans’s Gray Ghost take it upon themselves to censor it. Where’s the line? What distinguishes vandalism from art?

And I’ll give you a perfect example.

A friend of mine was commissioned to paint a mural on the backside of a local bar. She spent weeks on it, adding incredible touches to make it look like a fine New Orleans double. And it is a nice thing to see while walking in the neighborhood, rather than an ugly white wall.

Only. Someone tagged it. I couldn’t help but feel upset. Here I am, a proponent of street art, and I’m upset by some tagging? Well…maybe it’s because I think it’s rude to tag someone *else’s* work. It’s like going up to a painting on a museum wall and signing it. Right?

Judge for yourself. Here’s the mural (with the tag) and a close up of the tag. Lemme know what your thoughts are. 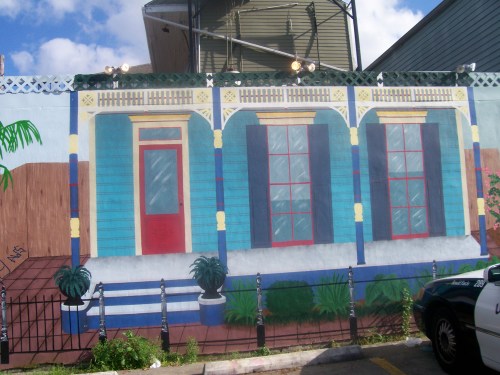 5.22 Update: So, on a recent walk in the neighborhood, I noticed that the tag had been painted over. Was this Jenn, the artist, while she was back in town visiting? Was it the property owner, who’d paid for the gorgeous mural? Was it a kindly citizen? Here is a snap of the “fixed” mural: